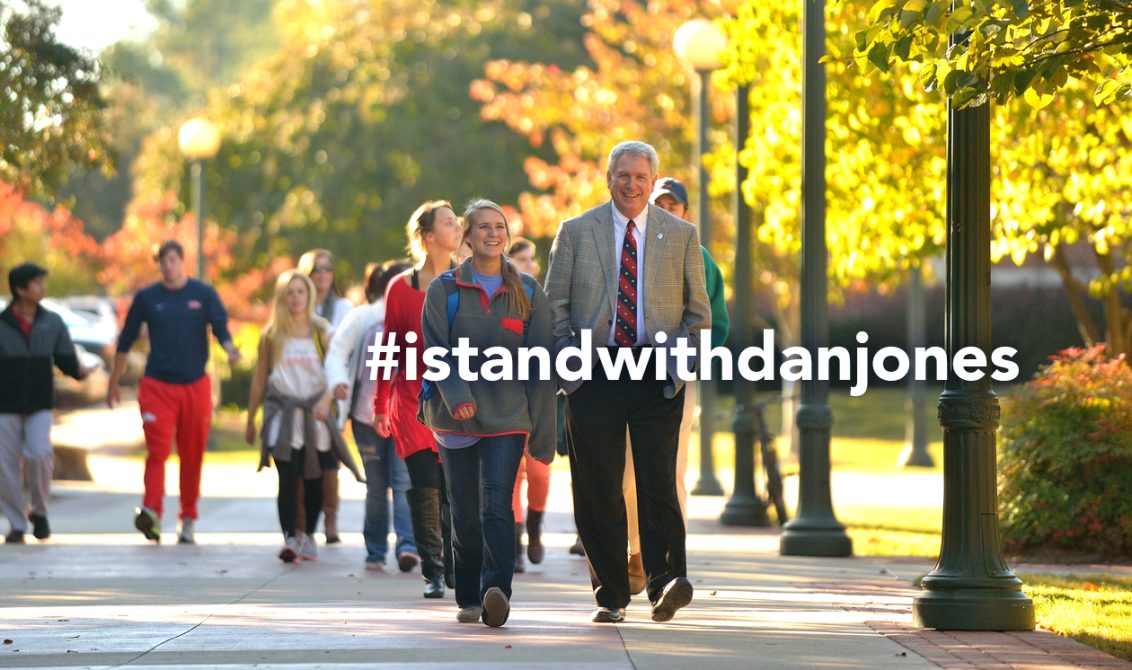 On Friday, March 20, at 6:40 p.m. the Board of Trustees of Mississippi?s public university governing body, the IHL, issued a brief statement: they would begin the search to replace Dr. Dan Jones as chancellor of the University of Mississippi.

Disbelief gave way to fury over the weekend: an obscure committee had sacked the popular president of the state?s largest university less than a week after he had successfully returned from five months of cancer treatment. And they wouldn?t even say why.

The following Monday, in front of a room full of outraged Jones supporters and a bank of cameras, Alan Perry, the vice president of the IHL Board finally offered an explanation of their decision. He focused on granular-sounding concerns about ?business and financial issues? at the medical center, the unit of the chancellor?s portfolio that is most autonomous.

Mr. Perry concluded his remarks with this admonition:

?It will do no good to anyone, least of all Ole Miss, to continue in a prolonged and rancorous public dispute. More injury can be done than I suspect any of us can imagine.?

The people who have continued to publicly dispute the board?s decision include Chancellor Jones? predecessor Robert Khayat, every major student organization, the faculty senate, the alumni association, major donors, the athletic department and coaches, the medical center leadership, past student body presidents and newspaper editors, and 7,500 signatories of a petition denouncing the decision.

Most scoffed at the suggestion that the near-unanimous outcry could injure Ole Miss. Take away Dr. Jones? defenders, and there would be no Ole Miss left.

It?s easy to explain why Dr. Jones has received so much support. He has continued ? and, by many accounts, accelerated ? the university?s upward trajectory that Dr. Khayat began when he entered office 20 years ago.

The university has grown by more than 4,000 students over Dr. Jones? six-year tenure despite stagnant state and national college attendance figures. Applications have risen at an even faster rate, so the university has also become more selective: this year?s freshman class, the largest in history, set the record for average high school GPA and ACT score.

The low-key Jones has been an even more prolific fundraiser than the magnetic Khayat: private donors have contributed $350 million over the past three years, allowing the university to invest in capital projects, faculty salaries, and student services in spite of state allocations to higher education.

Two decades of transformational leadership have lifted morale to an all-time high. Dr. Jones seems to have finally brokered a tenable armistice in the furious 30-year battle over Old South iconography. A revitalized athletic department ? thanks to hires made by Dr. Jones ? has sparked unprecedented success in each of the major sports and long-overdue facility upgrades. And national accolades and glowing media coverage have begun to change the outward perception of a university that has traditionally been thought of as a racist party school, if it was thought of at all.

The IHL Board itself has praised Dr. Jones for his role in these achievements. They still want him to go.

The move seems so irrational that speculation has been rampant that it was a political coup d??tat. Many have pointed the finger at Mississippi?s Republican governor Phil Bryant, who supposedly didn?t like Jones because he was ?too liberal? on race, LGBTQ rights, and Obamacare. Others suspected that it was the ?Colonel Reb crowd? ? the few remaining power brokers who want to reinstate the old mascot and other Confederate symbols. While those folks haven?t leaped to Jones? defense, there?s little evidence tying them directly to the board?s decision.

Money and power, not politics

The likely story is less sinister but perhaps more pernicious than the most of theories floating around. If you combine?public statements?with reported?accounts, it becomes clear that a majority of trustees?believed that the failure to maximize financial returns?at the medical center outweighed the educational and social success the University of Mississippi?has experienced under Dr. Jones? leadership. Ultimately, it seems Dr. Jones’?removal is less about political motives and more about the board’s?increasingly?meddlesome, corporate mindset — and the philosophical?and personal?frictions that developed as a result.

The IHL Board is made up?of 12 appointees chosen?by the past two governors and confirmed by the Senate. The membership is largely pulled from Mississippi?s small web of economic elite: eight past or present?corporate executives; two prominent attorneys; and two physicians. While the?names of the trustees are unknown?to most Mississippians, their employers are very familiar — BancorpSouth, Hancock Bank, Mississippi Power, Atmos Power, Sanderson Farms, AT&T of Mississippi. If Mississippi had its own Fortune 500 list, most of the top companies would be represented.

Aided by a powerful Commissioner of Higher Education, the IHL Board?is charged with making top-level policy decisions for the state’s eight?public universities. Like most systems, the consolidated board of trustees works fine when it is operated by conscientious people who respect the boundaries of their authority. When they do not, however, there are no checks or balances to put them back in place.

It doesn’t help that the board typically operates outside the attention of the?public. Their monthly meetings are numbingly dull, in part because Mississippi?s weak public meeting laws allow them to hammer out the juicy issues?– such as the long preamble to?Dr. Jones’s dismissal — behind closed doors.?Therefore, years of building tensions were only exposed to the public?at their bitter conclusion, leaving the Ole Miss community whiplashed and confused.

In his public explanation, Mr. Perry, a well-established?corporate lawyer with a CPA, presented information that?even the most informed members of the public were?hearing for the first time. The case against Dr. Jones?focused?on one issue and one alone: disorganization?and inefficiency in the procurement and contract management process at the University of Mississippi Medical Center (UMMC), a $1.6 billion, 10,000 employee operation in Jackson that constitutes 13 percent of the university?s students but 75 percent of its total budget.

As the board itself made clear,?concerns over inefficiency are not to be equated with financial trouble or graft. UMMC was able to reinvest a $35 million profit last year, and the board has denied any suspicion of corruption or wrongdoing. Overall growth has been remarkable: the medical center?s budget has tripled over the past 12 years ? first under Dr. Jones? direct leadership as vice chancellor of health affairs, then under his supervision as chancellor.

However, members of the board still thought?UMMC wasn’t?making as much money as it could, and they sought?more power over the administration and management of medical center after taking a hands-off approach for most of its existence. Personal relationships frayed?and mutual trust eroded?as Dr. Jones defended?his executive authority and the UMMC officers?who reported to him.

When it came?to healthcare in the country?s unhealthiest state, Dr. Jones ? a former medical missionary ? did?not share the board’s dollars-and-cents-first?mentality, nor?did he?appreciate?the board’s?adversarial?inquisitions. Apparently he told them so in no uncertain terms, which only encouraged the board and their?commissioner, Hank Bounds,?to intrude into UMMC’s affairs even further.

UMMC is a sprawling and complex institution, and IHL policy gives the board a heavy hand if they choose to micromanage: all contracts over $250,000 and leases over $100,000 must receive their consent. The board stated that UMMC has violated the approval procedure ? either alerting the board retroactively or last-minute ? for 32 contracts worth about $24 million since July 1, 2009. UMMC has explained that most of these discrepancies were legal misunderstandings that have been resolved, but the board still cited them publicly as evidence of a system in disarray (omitting, of course, UMMC’s rebuttals). Privately, they?suspected that UMMC’s leaders were?deliberately trying to evade their oversight.

A review ordered by the board in 2014 showed that UMMC has taken strides to streamline its procurement process and install contract management?software to replace the old paper-based system. Nevertheless, the board claims that UMMC had not made sufficient progress for Dr. Jones to keep his job. Their expectations remain opaque ? in the February board meeting, Mr. Perry praised UMMC?s improvements and good-faith cooperation ? but the subtext is clear: the board wanted to assert more power over the medical center budget, personnel, and organizational structure, but Dr. Jones would not let them encroach any further.

Some reports?say that?Dr. Jones had been warned that he wouldn’t be renewed as far back as last October, but the?situation hit?another flashpoint in?February, when Dr. Jones promoted LouAnn Woodward, UMMC?s second-in-command, to replace retiring vice chancellor Jimmy Keeton. The board had demanded an outside hire, and Mr. Perry asked Dr. Jones to leave the final selection to the board. Presidents have the right to make employment decisions for their universities, and by requesting that Dr. Jones do otherwise, Mr. Perry breached the board’s code of conduct included in?IHL bylaws.?Dr. Jones rebuffed the board?s intrusion on his authority and selected Dr. Woodward.?The board decided not to block her appointment, as they could have, but one month later, they began searching for a more pliant executive officer for the university.

Supporters of Ole Miss and other IHL schools?have been baffled about why a board charged with making macro-level decisions for the entire public university?system?would use such?a myopic set of criteria when reviewing a president’s?performance.

Board members acknowledge that the University of Mississippi as a whole has flourished under Dr. Jones? leadership, and the medical center has done ? in Mr. Perry?s words ? a ?wonderful job of bringing healthcare to the state.? Yet they have rendered those successes subordinate to lingering procedural inefficiencies and Dr. Jones? resistance to changes they wanted to impose against his and the UMMC leadership?s wishes.

None of this implies that the board isn?t justified in asking tough questions about the financial management of UMMC, which leaves a large economic footprint within the state. As board president Aubrey Patterson stated, it is imperative that internal protocols and technology can keep up with the increasing complexity and uncertainty of healthcare finance. He makes a valid point, but by turning slow implementation into a fireable offense for the university’s chief executive, the board has demonstrated how dislocated their priorities have become from the public interest.

Successful university leaders maximize the intellectual, cultural, and civic quality of their institutions and, by proxy, their states. The public should expect prudent financial stewardship, but not a relentless focus on growing the bottom line. If the board used that standard, Dr. Jones? contract would have been extended unanimously.

By refusing the extension, the board has articulated a different standard: the chancellor?s paramount duty is to maximize the financial returns of the university and medical center (and to submit to the board?s authority when disagreements arise). The educational and social responsibilities of the institution are secondary concerns, at best.

To that, I can only echo Mr. Perry?s admonition: More injury can be done than I suspect any of us can imagine.