We all love Mississippi, so why don’t we like living here?

The great Mississippi author Willie Morris was fond of?saying, “We all love Mississippi, but it doesn’t always love us back.”

Few quotations better relate Mississippi?s simultaneous capacity for affection and affliction. However, recent data?suggest that there may be less love lost between Mississippians and their home state than Willie realized.

Gallup asked people around the country whether their state was ?one of the best? or ?as good as any? to live in. A majority?of Americans thought their state deserved elite status, but a mere?26 percent of Mississippians concurred.?Only Rhode Island and Illinois had lower?self-regard.

Mississippians are accustomed to being labeled?the worst by the rest of the country. We?re even used to hearing it from our Southern neighbors,* who exclaim ?Thank God for Mississippi!? for keeping them off the bottom of national tables.

But considering how passionately we tout the state’s virtues, it is surprising?to see such an open?expression of dissatisfaction coming from Mississippians ourselves.?Twice as many Mississippians called the Magnolia State the absolute worst state (15 percent) as called it the best (7 percent).

It would be a mistake to write?this poll off as?an idle popularity contest. The?warm feelings that people?may hold about Mississippi in?the abstract seem to be?trumped by the very tangible condition?of their bank accounts, their health, their schools, and their communities.

On?those terms, Mississippi is not?among the best states in the country. Most Mississippians experience an inferior standard of living relative?to?other Americans.

Mississippi finished third worst on?Gallup’s separate?“well-being” index, which takes into account an array of quality of life indicators (full explanation?here.) Every state registers?between 61.4 and 70.4 on the 100-point scale. The national average is 66.2; Mississippi landed at 63.7, below every state except Kentucky and West Virginia.

The below scatter plot illustrates the?connection?between the well-being?of a state?s residents and how positively they feel about the state. 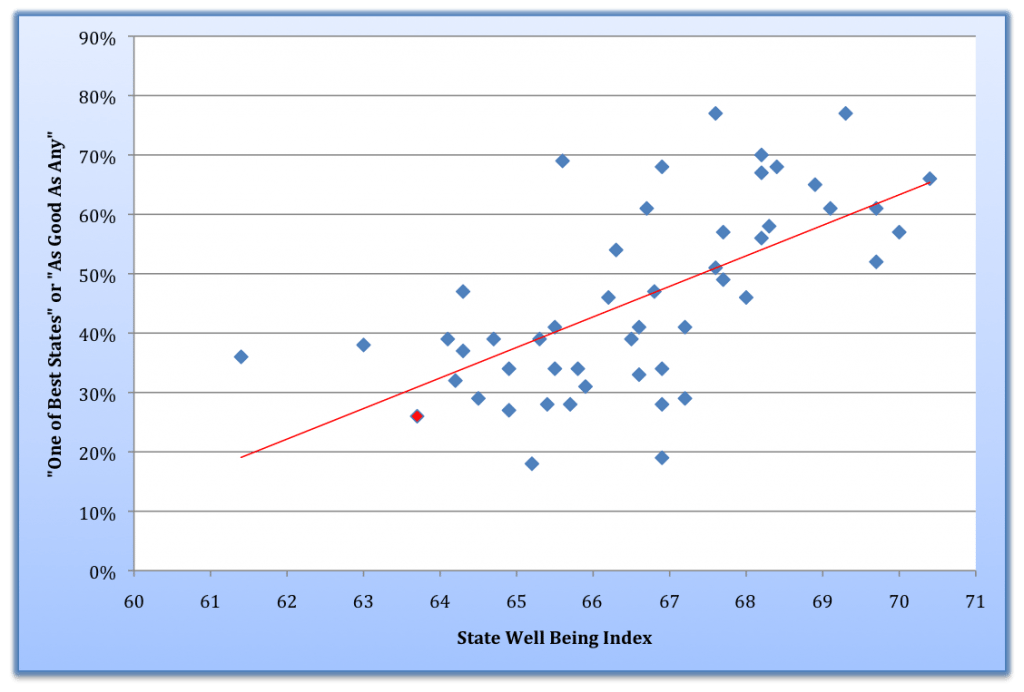 The relationship?is positive (and statistically significant): for every one point increase in Gallup?s well-being index, the percentage of residents placing that state among the nation?s best rises by about five points. Quality of life differences explain 58 percent of the variance in?state-to-state favorability.

You?ll see the point representing Mississippi in red. It falls only slightly below the trendline, or the expected “best state” response given a?state’s?well-being?score.

We?re all aware that correlation does not necessarily imply causation. But basic intuition suggests that someone who doesn?t think much of their own well-being isn?t going to respond favorably about their home state. And more often than not, they’ll want?to move to?a place where they hope to?live?better.

In another survey, Gallup?asked residents of every state whether they would leave?if they had the chance. Nearly two in five Mississippians said they would, and 16 percent said they were likely to go?in the next 12 months. Both ranked?among the 10?worst in the country.

The percentage of residents looking to move is strongly correlated with a state’s favorability.?Mississippi, again highlighted in red, falls almost exactly where you would expect given its?relative unpopularity. 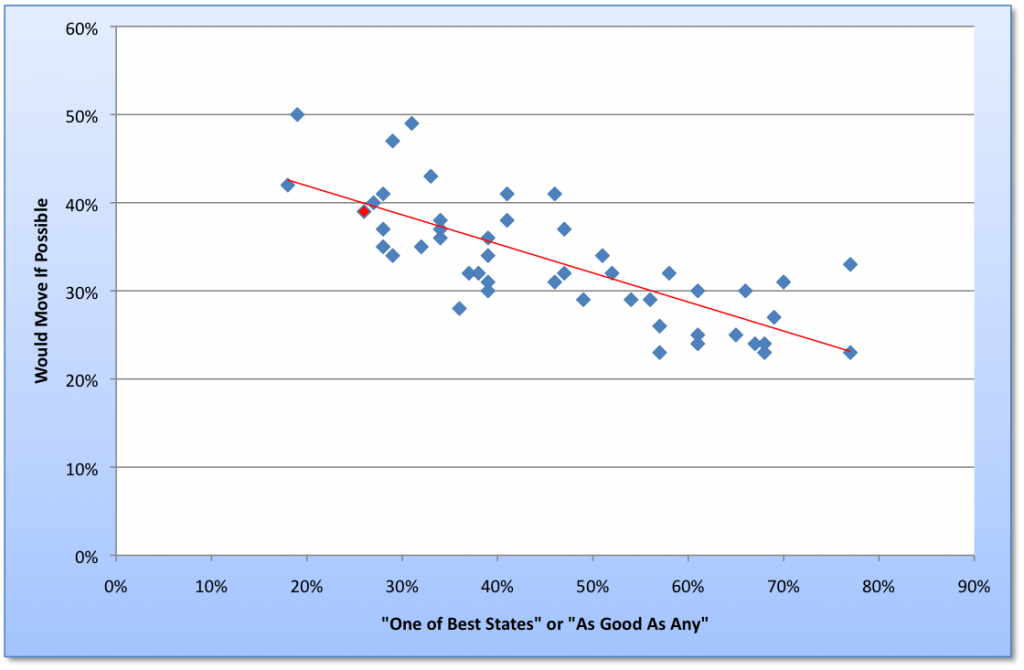 Mississippi was already the only state in the South to experience persistent outmigration since 2000. In the fastest growing region in the country, thousands more Mississippians?move out each year than move in.

Outmigration is both cause and effect of economic stagnation. Studies show that high concentrations?of skilled workers fuel economic growth, but Mississippi has both a woeful record of educating its own and few magnets to pull educated workers from?other states or countries. Despite?all the triumphant ribbon-cuttings in recent years, the macroeconomic picture is bleak:?Mississippi has not added a single net job since October 1997, and real median income is $9,000 less than in 2000.

To be sure, not everyone in Mississippi is struggling. Mississippi offers some people as good or better quality of life than anywhere else in the country. ?I count myself among them. We have the ability to live elsewhere, but we’ve chosen Mississippi. We are the ones who get to praise Mississippi?s literary and musical culture, its warmth of climate and personality, its other ineffable charms. That?s because we have the security of good jobs, good education, and good health. To put it in Willie Morris’s terms: we love Mississippi because it loves us back.

But the ability to live well in Mississippi is held far too exclusively. One out of?three jobs does not pay enough to lift a family out of poverty, and three out of?five families are forced to live paycheck to paycheck. ?More children are born into poverty than in any other state, and — often bunched together into dismal schools — their chances of rising out are lower, too.

Most troublingly,?well-being?in?Mississippi is still largely determined by?the?characteristics farthest from our control: race, gender,?sexual orientation.?It is striking that?the 26 percent who responded favorably about Mississippi is roughly equal to the state’s straight white male population — a statistical coincidence, though the?two groups certainly have?plenty of overlap. Others can be successful in?Mississippi, but that genetic combination still counts for a lot.

My point in citing these Gallup surveys is not to pile insult onto?Mississippi’s?injury. Rather, it is to highlight?the connection between our identity as Mississippians?and the well-being of our fellow citizens.

*Even most of our neighbors ?feel much more positively about their states. Tennessee (47 percent), Alabama (39 percent), and Arkansas (37 percent) each engender greater affection than Mississippi. Only Louisianians (27 percent) were nearly as cynical.