Here?s what we thought about this week, the 10,245th in Mississippi state history:

Headline of the Week:?Mississippian Donna Tartt wins Pulitzer Prize for fiction with ?The Goldfinch?

With the announcement this week of Donna Tartt capturing the Pulitzer Prize for fiction, another star is added to Mississippi?s literary crown…Tartt was born in 1963 in Greenwood and reared in Grenada. Her literary career began at age 13 when she published a poem in the Mississippi Literary Review. She began her college career at Ole Miss where she was mentored by Willie Morris and Barry Hannah.

In the spirit of Tax Day, we took a closer look at how Mississippi benefits from?federal largesse in?“A thank you note to the taxpayers of America”:

We Mississippians are taught that when someone does something nice for us, it?s only proper to thank them.

Between 1990 and 2009, our 3 million residents?collected?$404 billion in federal spending but only contributed $165 billion in taxes ? a $239 billion tab we?ve run up at your expense. Given that our state?s annual GDP is $100 billion, it?s not likely that we?ll repay you anytime soon.

This chart from the Mississippi Economic Policy Center?sheds light on the consequences of Mississippi’s tax policies for our poorest citizens: 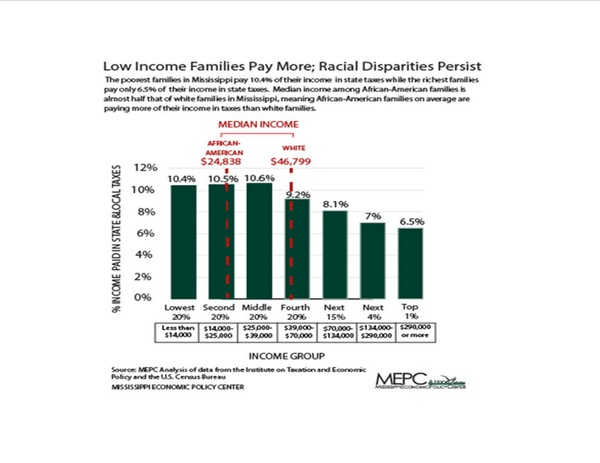 The cost of diabetes treatment in Mississippi is equal to 3 percent of the state’s GDP. http://t.co/jYIoOtqtHf pic.twitter.com/gfDQnttjov

Librarians are most common in the northeast, northern plains, and Mississippi: http://t.co/42s0w6Zxt7 #nlw14 pic.twitter.com/0HHyHkChXQ

“Damned or blessed, America is composed of 50 Mississippis which vary from each other in degrees..”-Len Holt, 1965 #Mississippi ? Jackie Mader (@jackiemader) April 17, 2014

Say what you want about Mississippi, but you have to admire our loyalty. #EliteEli pic.twitter.com/Rd3qPHHYUQ ? Rethink Mississippi (@RethinkMS) April 16, 2014