Women make $9,800 less than men in Mississippi. In other news, Mississippi is one of five states without a pay equity law. 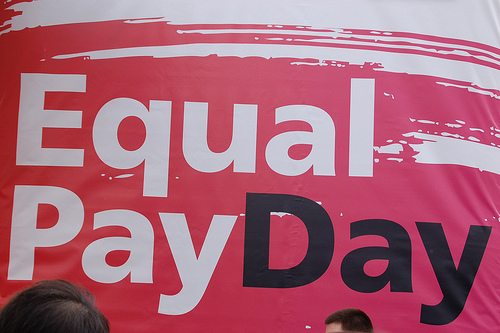 Today is 2014’s Equal Pay Day: the date that represents how far into the next year women would have to work to in order to make as much as men did in the previous calendar year.

In Mississippi, the median annual income for women with a full-time job is?76 percent of the median male income. That shakes out to approximately 60 more working days, or $9,800 less every year.

Mississippi’s pay gap is the 9th-largest in the country, and women have fewer legal avenues to combat wage discrimination than elsewhere. Mississippi is?one of only five states without any form of equal pay law. Women still receive protection from the federal Equal Pay and Lily Ledbetter acts, but the size and persistence of wage disparities show that more action is needed.

Other states’ legislatures have been busy working to eliminate the gender pay gap this spring. New laws have taken the burden off women claiming discrimination and put the onus on employers to explain their reasoning for unequal wages. Laws also protect workers who compare paychecks with each other and ensure that state government contractors follow equitable pay guidelines.

It is imperative that Mississippi follows suit. Mississippi?s women deserve equal pay for equal work, and when they do not receive it, they should have every possible legal recourse to hold their employers accountable.

But wage discrimination alone does not account for the entire income gap. Women face other structural barriers that restrict economic opportunity, and Mississippi should combat those just as aggressively.

Given these economic limitations, it’s no surprise that Mississippi’s economy is especially hard on single mothers. More than three-fourths?of Mississippi’s children in poverty live in household headed by a single mom. For those women hoping to work while raising young children, the state is stingy with child care benefits. Even among those that qualify, thousands of children are stuck on a waiting list, often leaving their mothers to choose between economic independence and the needs of their children.

These working women deserve our support, but in doing so, we should be careful not to reduce pay equity to a “women’s issue” or “poverty issue.” It is a basic economic issue that affects the livelihoods of all Mississippians.

Even the state’s two-income families are struggling: more than 61 percent of households do not have the savings to stay afloat after a layoff or medical emergency. Median income has dipped by $3,000 and poverty has risen by four points since 2007. Families need both partners to earn a fair wage in order to achieve economic security.

On a macro level, the state of Mississippi’s economic expansion over the next generation will be driven by women. Women have earned 60 percent of the degrees granted at the state’s public universities over the past five years, and the gap is accelerating.

Economic growth is directly related to the number of skilled workers in a state. If the pay gap persists, Mississippi can expect that many of its most productive workers will move to states that will compensate them fairly.?That will exacerbate Mississippi’s outmigration rate and leave our economy less rewarding?for everyone.