In a new Friday feature we’re starting here at?Rethink, we will review the issues, ideas, and interesting tidbits that stuck with us from the past week.

Here’s what we thought about this week, the 10,241st in Mississippi state history.

“On the Map and in the Mind”

Guernica?published their quarterly issue on the American South — featuring a distinctively Mississippi flavor.

Mississippi-born, Brooklyn-living Catherine Lacey writes about LGBT rights, racism, and the other things we’re too polite to talk about in??“Against Bless-Your-Heart Manners“:

I?m from the South. My parents are from the South. Their parents were from the South, those parents? parents were from the South, and it keeps going on like that for quite a while, so I could no sooner dispense of my inherited preoccupation with not offending you any easier than I could extract the calcium from my bones. And though this is a nice thing an awful lot of the time, tiptoeing around offense is not an asset to any decent writer.1?On a broader social level or when mixed with politics, avoiding controversy stymies social progress, encourages systemic oppression, and lets old wounds fester. This is the nasty underside to Southern hospitality and bless-your-heart manners, and this is what I?m too often not talking about when I talk about the South.

…When I visit Mississippi and someone asks me where I?m from, they rarely believe me when I say, ?Here.? I used to be proud of this, the fact that I didn?t, from the outside, conform to the idea of a Southerner. But wanting to distance myself from the South because of its social stasis and history of intolerance is to ghettoize it from the rest of the country, and to refuse to see it as a place that can and will transform in the coming decades

Growing up in Mississippi, I?ve seen how these backward ideas about class and race and healthcare and education and housing and racism impact everyday lives. For example, my mother wouldn?t let me go to my homecoming dance because the yacht club where they were having the dance threw a fundraiser for David Duke, an ex-Klan member, when he was running for governor of Louisiana. So I grew up seeing how personal politics could be. It?s something I can?t avoid if I?m telling the truth about this place and writing about this community and Mississippi honestly.

…I love the South?the landscape and the beauty?it feels like a part of me. I know that sounds hokey, but that?s how it feels. And there are things about the South?the politics, the classism, the racism?that I hate, and I want to be here to fight those things. I don?t want to be in California or Michigan just complaining about them. I?m here trying to make a difference in the way I can, writing about it. And I want younger people, especially kids from my community, to see that being successful doesn?t have to mean leaving a place like this. You don?t have to trade in your family or your sense of belonging for that.

If I had to raise a child now?no matter the gender?I would probably not choose Mississippi. There?s so much love and history of black excellence in our state, but the state?s structural commitment to black death is unparallelled.

But if that?s true, why did you stay there so long?

I stayed there so long precisely because of the state?s commitment to black death and my commitment to my students. I loved my students because my teachers had loved and believed in me. Like you, I was only a few years older than my first class of students, so I was committed to advancing their life chances. I needed to do my part to ensure their sure-footedness in the next leg of their journey, whether they stayed in Mississippi or left.

Graph(s) of the Week

These two charts, found in this report from the Center for Mississippi Health Policy, help explain Mississippi’s lagging signups for insurance under the Affordable Care Act.

The ACA guarantees everyone access to a health plan — regardless of prior medical history — and offers tax credits to make it affordable for low- and middle-income individuals and families. Yet only only 8 percent of Mississippians eligible for the marketplace have actually registered for a plan (see our full analysis here). 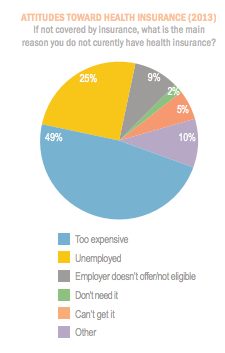 When surveyed, the majority of Mississippi’s uninsured say they don’t carry insurance because of expense or exclusion. Only 2 percent say they don’t need it.

However, when the same group was asked whether they would buy insurance now that it’s available, two-thirds said “no” or “don’t know.”?

The ACA enrollment period for 2014 closes March 31st. If you don’t have insurance, that’s the last date you can sign up through www.healthcare.gov?until October. Go on and look around.

At 9 deaths per 1000 live births, MS’s infant mortality rate is closer to Botswana’s average than to that of the US pic.twitter.com/Wj3JHDJ4yb ? Rethink Mississippi (@RethinkMS) March 19, 2014

Mississippi’s new #TANF drug testing policy would only make sense if it applied to the legislators who voted for it. http://t.co/H6PVHFyQk5 ? Rethink Mississippi (@RethinkMS) March 18, 2014

Next week’s theme will be income inequality and mobility. Matthew Williams of the Mississippi Center for Justice has delved into the details in a three-part series to be published Tuesday through Thursday.