Our state?s healthcare environment suffers from a chronic illness: we have the worst health problems and the least money to afford treatment. One-fifth of Mississippi adults have no means to pay when they show up at the hospital ? often through the emergency entrance.

With the passage of the Affordable Care Act (ACA) in 2010, the federal government wrote Mississippi a much-needed prescription. Federal subsidies allowed many low- and middle-income families to afford private health insurance for the first time through a federally run insurance exchange, and everyone living below the subsidy eligibility level would be eligible for Medicaid, the federal-state public insurance program. The federal government offered to pay for the expansion over current Medicaid coverage in full for the first three years and 90 percent in perpetuity.

More Mississippi families would gain health insurance for treatment, and hospitals serving large uninsured populations would remain financially secure, avoiding closure or cuts in services. However, when the Supreme Court affirmed the ACA?s constitutionality in 2012, they allowed states to opt out of the Medicaid expansion provision. Southern states that expanded Medicaid, including Arkansas, West Virginia, and Kentucky, have experienced among the largest decreases in uninsured rates in the country, according to a survey from WalletHub. Mississippi, on the other hand, is the only state in the country that faces an increasing uninsured rate, which has grown by 3.34 percentage points.

The ?Coverage Gap? refers to people who currently have no options for affordable health insurance. This gap includes adults whose household income is below the Federal Poverty Level ($11,670 for an individual, or $23,850 for a family of four). Currently, adults in these income ranges earn too much to qualify for Medicaid, and too little to qualify to purchase health insurance on the federal Health Insurance Marketplace. Meanwhile, higher-income individuals are receiving help.

This gap is caused by our state?s refusal to expand Medicaid. Until our state expands eligibility, an estimated 138,000 Mississippians?will be trapped.?Those left out include?cashiers, waiters, childcare workers, and many others who work hard every day but cannot afford the care?they need to stay healthy and continue providing for their families.[/mks_pullquote]

After the 2012 Supreme Court ruling, Mississippi?s decision on Medicaid expansion determined the financial health of hospitals. Since its rejection, even hospitals previously given a good bill of health have had to cut back. Even though cuts in federal money are minimal at this stage, news of economic distress at hospitals has touched every part of the state. The state auditor released a study in April 2014 that assessed the financial health of publicly owned rural hospitals from 2009 to 2012. The auditor?s report rated the Southwest Mississippi Regional Medical Center in McComb above the national average in financial strength. In February 2014, however, the hospital ended contracts with five staff doctors, citing a projected $8 million cut in federal reimbursements without the financial benefit of Medicaid expansion.

Other providers have experienced even greater pain. The Montfort Jones Memorial Hospital ? Attala County?s only healthcare provider ? closed its intensive care unit in April and laid off 38 employees, including 14 nurses. In 2015, the economic impact on this vital healthcare facility culminated with an announcement of potential closure. State legislators passed HB 1419 in 2015 to keep the hospital?s doors open through a bond, transferring the cost to the public. Pearl River County Hospital and Nursing Home eliminated 19 positions. North Mississippi Health Services, which serves 24 rural counties, laid off 109 employees. The Singing River Health System on the Gulf Coast announced the closure of two primary care clinics in Gautier and D?Iberville.

The state?s rejection of new Medicaid enrollees all but guarantees that hospitals will remain in economic panic. Creative ideas to generate revenue will only take healthcare providers so far. They are bound by federal law to treat people, now with less staff, and will continue to absorb additional costs while losing the reimbursement stream that previously helped keep them out of the red.

In 2012, the IHL?s University Research Center projected major increases in state revenue and employment from an expansion of Medicaid. This would create an economic boom for a state that lags behind the rest of the country in nearly every metric. Forecasting the next decade, the IHL report estimated that increased federal spending would create 9,000 jobs and produce $841 million in personal income.

The state would incur additional Medicaid costs ? never more than 10 percent of the expansion cost ? but in return it would get a healthier population, a more productive workforce and an increase in tax revenue. Blocking Medicaid expansion may give a short-term political boost to conservative state lawmakers, but the long-term public costs of their position are devastating. Despite the potential economic growth, state leaders remain steadfastly opposed, citing their belief that the federal government would fail to provide its share of the costs. The federal government already contributes roughly half of Mississippi?s budget, and state leaders quickly turn to federal support when devastation strikes, as we have seen with hurricanes, tornadoes, floods, and oil spills. Mississippi?s uninsured rate and doctor shortage are slow-moving disasters of their own kind. These chronic social ills require federal support as much as any natural disaster.

Hospitals are required by law to treat patients regardless of their ability to pay, but they are partially reimbursed for services to provide treatment to the uninsured through federal Disproportionate Share Hospital, or DSH, payments.

[mks_pullquote align=”right” width=”275″ size=”24″ bg_color=”#008DA7″ txt_color=”#ffffff”]?Closing the gap in health coverage will bring stability to struggling families and create thousands of much-needed jobs in healthcare. Rejecting this health reform fails to acknowledge our growing uninsured rate and leaves job-creating revenue on the table.?

The ACA was designed to shift federal funds from DSH to Medicaid expansion. With this change, hospitals would no longer rely on back-end federal reimbursements because more patients would pay on the front end with Medicaid. When the law was enacted, mandatory Medicaid expansion was an integral part of the law as a whole and the 2012 Supreme Court ruling created a potential coverage gap with financial implications for hospitals. The reduction of DSH payments under the ACA is a reality regardless of whether or not a state expands Medicaid eligibility. Mississippi?s doctors and hospitals are still required to provide care for the uninsured, and without Medicaid expansion they?re now on the hook for most of the costs themselves. For providers in Mississippi?s most underresourced areas ? also the areas with the greatest healthcare needs ? layoffs and bankruptcy have already begun.

A 2012 report from the University Research Center at the Institutions of Higher Learning (IHL) estimates that if Mississippi had expanded Medicaid eligibility, uncompensated care would have declined 57 percent ? corresponding with the decline in DSH payments. Arizona?s hospitals reported a substantial gain in business and a 31 percent decline in uncompensated care during the first four months of Medicaid expansion.

Mississippi already had one of the worst doctor shortages in the country. The rejection of Medicaid expansion exacerbates the problem by reducing the financial viability of practicing in many poor, underserved areas. Mississippi has fewer?than 60 percent of the doctors and nurses that are required to meet current demand, and the situation is worse in most rural areas. More than half of the state?s physicians are concentrated in four metro areas, with 36 percent in Jackson alone.

Nearly every county in the state is classified as a Health Professional Shortage Area (HPSA) by the U.S. Department of Health and Human Services. According to the IHL report, HPSA counties in Mississippi need 430 additional primary care doctors to reach an adequate population-to-physician ratio. The deficit only increases if dentists and mental health professionals are included.

Medicaid expansion was designed to kill two birds with one stone. The uninsured would be extended affordable access to healthcare, thereby increasing demand and payments for doctors and hospitals in the areas that were not previously fiscally viable. In short, Medicaid expansion should simultaneously reduce the rate of uninsured adults and help fill the state?s massive shortage of providers.

By expanding income eligibility for Medicaid, many more people would be able to pay for medical treatment, which would drive higher demand for a wide range of healthcare services. 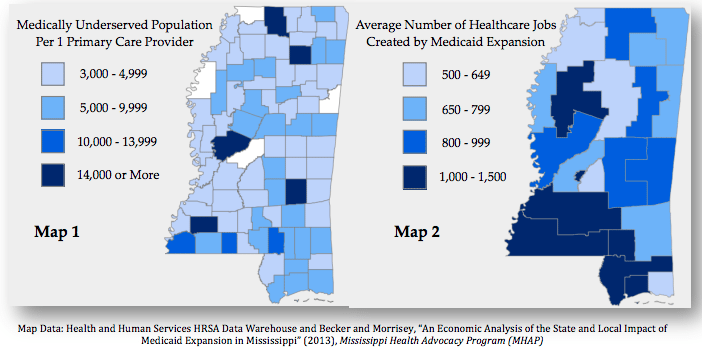 With Medicaid expansion, these shortage areas would see substantial increases in the number of adults gaining health insurance, driving economic activity and employment in the healthcare industry. Map 2 shows the estimated number of healthcare-related jobs that would be created in geographic areas called Public Use Microdata Areas (PUMAs).

Taken together, the maps show that areas of the state clustered with the largest primary care provider shortages also stand to gain the most healthcare jobs through Medicaid expansion.

Medicaid expansion is not a cure for all of Mississippi?s health problems, but it will ease plenty of unnecessary suffering among patients and providers. Turning it down makes about as much sense as getting a prescription from the doctor, but never taking it to the pharmacy.