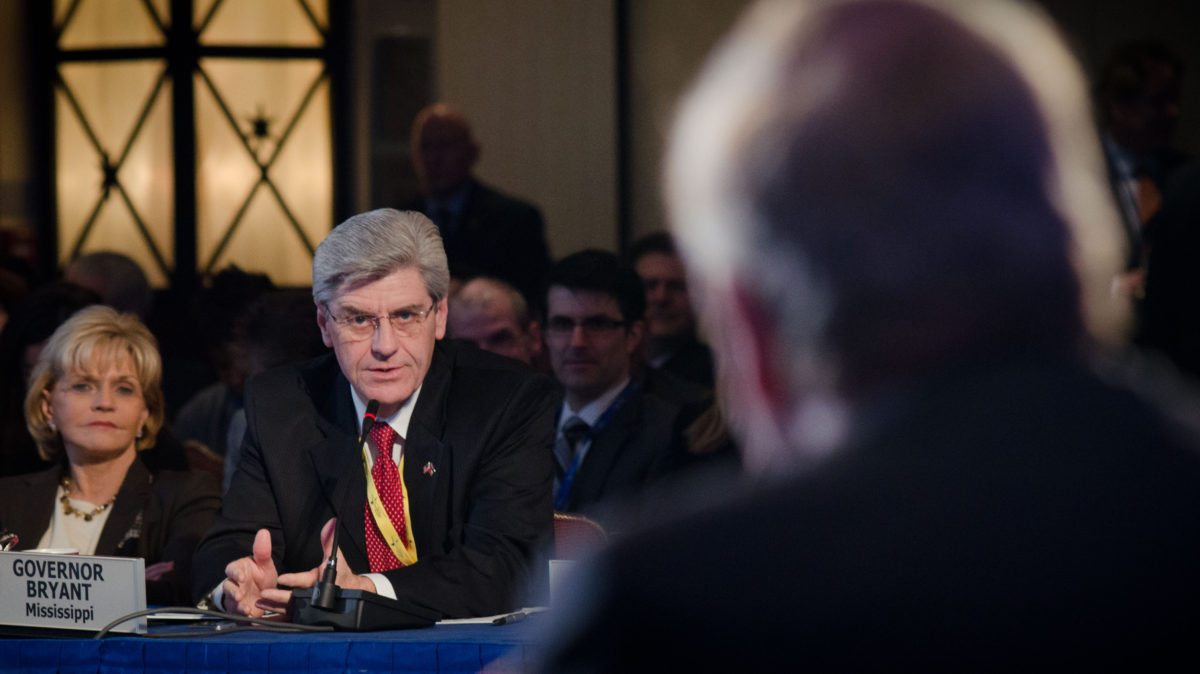 As we begin this year?s legislative session, Mississippians can rest assured that Gov. Phil Bryant has the country?s highest poverty rate under control. Here is how the Governor laid out his agenda in an interview with the Associated Press?s Emily Wagster Pettus:

AP: Poverty is one Mississippi?s most difficult challenges. How do you improve conditions?

Bryant: We?ve got a lot of families that have no father in the home, that have for three generations have never seen a parent come home from work. We have failing school systems. We?re not trying to place blame on anyone, but there are failing school districts in areas where they are needed the most? We?re going to ask the Legislature to remove any winnings at a casino from a parent who may owe child support. So you won?t be going around gambling and winning at the dice table and not taking care of your children? Every time we think we have a government program to solve it, it doesn?t seem to work properly. What will work is the restoration of the family system, adequate schools and job opportunities for every student that has the ability to fill those jobs.

After last year?s drug testing law rooted out crack-smoking welfare queens ? both of them, as it turned out ? Gov. Bryant is now on the case of the loafers who prefer the couch over the workplace and those deadbeat dads who use their child support money to shoot dice. Bold strokes!

I am a bit curious, however, why he didn?t mention any plans to boost wages among the 75 percent of low-income families that have at least one working member. Perhaps it was for the sake of brevity, because there?s no way to be serious about poverty reduction without including the working poor. Two-thirds of the aforementioned working families have a family member employed full-time, and many of the part-time employees work limited hours out of necessity rather than choice.

Surely Gov. Bryant knows these stats better than his mentor, former Gov. Kirk Fordice, who was fond of saying that his concept of welfare reform was buying the poor an alarm clock. In reality, hundreds of thousands of Mississippians wake up early, go to work, and come home to their families without reaching the middle class. That?s because 35.5 percent of Mississippi?s full-time jobs do not pay enough to lift a family of four above the poverty line.

I?m confident that Gov. Bryant has given the plight of these working families the same rigorous study and consideration as the connection between child support delinquency and the craps tables, because cracking down on the most sensational abusers without a broader strategy of economic inclusion is downright cruel. He may believe that government programs never work, but that?s OK, because many of the best anti-poverty policies are compatible with conservative principles. Plenty of states have found ways to put more money in the pockets of low-income workers without new bureaucracies or entitlements.

Among the most successful routes is to raise the minimum wage. Twenty-nine states have set minimum wages above the federal standard, which studies have shown can achieve poverty reductions without a negative effect on total employment or economic growth. Nevertheless, I?m sure Gov. Bryant had the best interests of the state?s working poor in mind as he fought to keep Mississippians earning the federal minimum of $7.25 an hour by signing a bill in 2013 that removed local control of minimum wage standards within individual cities or counties.

This year Gov. Bryant has tentatively embraced another conservative anti-poverty idea: a?state Earned Income Tax Credit that would offset the tax burden of low- and middle-income workers. The EITC would be a boon for thousands of working families ? or, at least it would be if it hadn?t been rendered meaningless through some kind of clerical mistake that erases the tax credit in years of less-than-robust economic growth. I say ?mistake? because there?s no way that someone who cares about reducing poverty would deliberately attach conditions to a tax credit for working families ? especially when auto manufacturers, Hollywood producers, shopping mall developers, and other recipients of state tax credits face no such strings.

Of course, poverty is dynamic: it?s not only about income, nor is it just about those who are currently defined as poor. I am excited to hear Gov. Bryant?s plans to create more economic security among Mississippi?s middle class, many of whom only live one unexpected blow away from poverty. More than 60 percent of Mississippi families lack the savings to weather a sudden job loss or, worse, the costs of a medical emergency. The federal Affordable Care Act was designed to extend Medicaid coverage to a large share of the Mississippians living paycheck to paycheck, thereby severing the link between medical bills and bankruptcy. But since Gov. Bryant has repeatedly rejected that idea, I trust he will unveil a comprehensive alternative to cover the 180,000 people he has left uninsured.

As for those single moms, he?s absolutely right that they are particularly susceptible to poverty. Three-fourths of Mississippi children beneath the poverty line live in single-mother households. After Gov. Bryant is done cashing out the casino chips from their exes, I eagerly await his proposal to provide quality, affordable child care so that they can work full-time jobs while raising their children.

I hope that Gov. Bryant has ideas for each of these issues during this year?s legislative session. Because once he?s taken care of the welfare cheats, junkies, loafers, and dice-shooting deadbeats, all that will be left is real people with real problems waiting for real solutions. And unlike unfounded stereotypes, real people can vote.