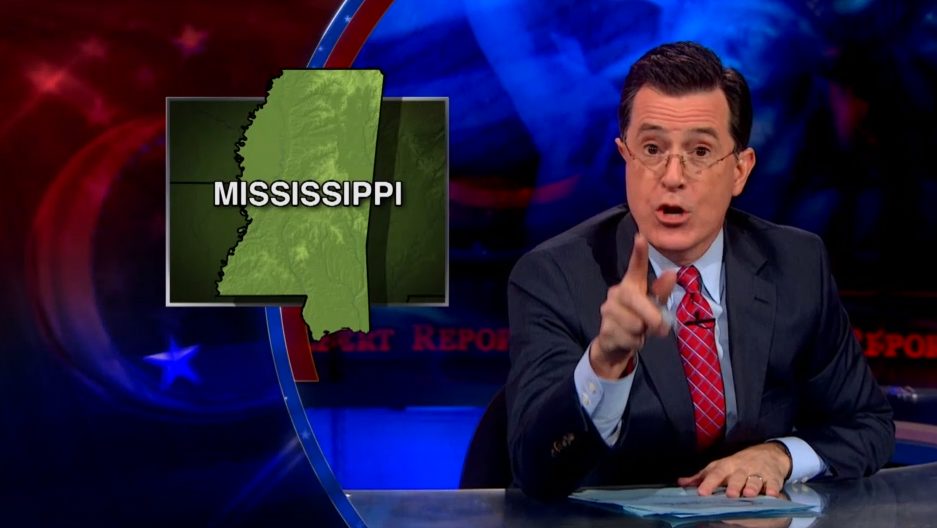 Stephen Colbert’s run as the bloviating host of The Colbert Report?comes to an end tonight. While Colbert himself isn’t disappearing — quite the contrary — the?conservative alter ego that has provided nine years of wickedly-sharp political satire is.

Over the course of 1,447 episodes, few subjects escaped Colbert’s comedic?gaze, and the state of Mississippi?is no exception. Most of these bits were?built upon?familiar?stereotypes, but?Colbert often found?clever?ways?to poke fun at?our state and its leaders while, in equal measure, lampooning the?condescending tone that many national figures use?when talking to or about us. That made it?hard not to laugh even when he hit close to home. Enjoy six of my favorites:

?That’s not just the Deep South. That’s the Dipped-In-Batter-And-Deep-Fat-Fried South.

And nobody… but nobody… out-stupids Mississippi.

All my life I have?dealt with hateful stereotypes about?Southerners. But now Senator Cochran has stepped up and shown the world a positive image of Southerners: we are intelligent, caring people, who also f**k animals.

This is a fast-moving story, and there’s still a lot we don’t know. For instance, there’s a Senator Roger Wicker?

Was it worth all that effort and all that suffering to see that expression on Mitch McConnell and John Boehner’s face when they sang [“We Shall Overcome”]?