If you watch only one online video today, make sure it’s this one

Earlier this year, John Oliver left The Daily Show for his own news-comedy program on HBO, Last Week Tonight.?As the title?implies, the show runs once a week,?which gives Oliver time to penetrate issues with greater depth than you’ll find anywhere outside of 60 Minutes. Oh, yeah — it’s funny, too.

Last Sunday, Oliver provided the above dissection?of?America’s broken prison system. Watch the whole thing — twice if you can — but pay special attention at?the 12:13 mark, when Mississippi’s own correctional failures make an appearance.

The full report is embedded at the bottom of this article. After the ACLU and Southern Poverty Law Center brought suit,?U.S. District Judge?Carlton Reeves issued the?scathing assessement that Oliver quoted: 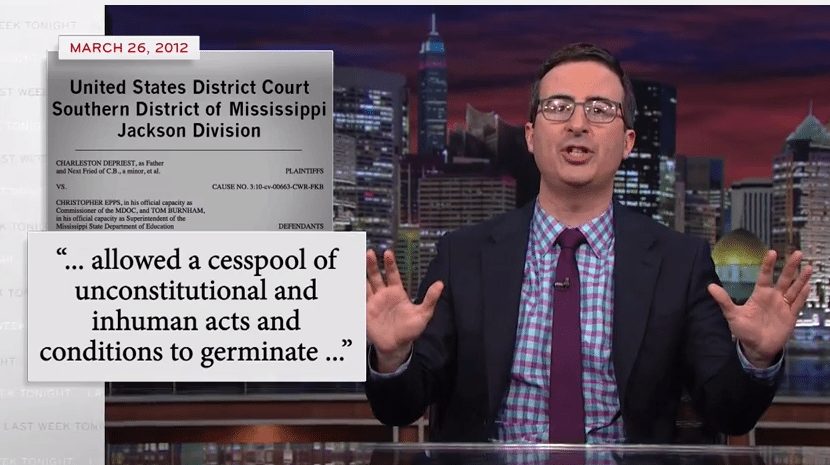 As Oliver explains, Walnut Grove was operated not by the Department of Corrections, but rather by a for-profit company called the GEO Group. It has since been handed over to another private operator, MTC.

Walnut Grove is?an egregiously bad example of private prison management, but it’s far from the exception. Economics — and thus, much human behavior — operates on the basis of incentives. Align them in the wrong direction, and you’re virtually assured of a negative outcome. As Oliver points out, that’s exactly what happens with private, for-profit prison operators.

GEO contracts with the government?to operate correctional facilities in exchange for?a lump sum payment, which states see as an easy way to cap their budgets. The operator?maximizes profit for its?shareholders by slashing expenses below the amount they receive from the?state. Often, that means cutting jobs — which is how Walnut Grove ended up with two officers responsible for up to 256 inmates at a time, according to DOJ. In total, GEO employed one guard?for every 60 inmates, far below the typical 1:10 ratio.

That may create inhumane conditions inside the prisons, but it guarantees ample returns?for shareholders on the outside. The GEO Group paid investors?$350 million in dividends in 2012, the same year?the lawsuit regarding Walnut Grove was settled.

In theory, the?government should exercise oversight over private operators, but well-placed campaign donations encourage politicians to look the other way. Between 2008 and 2011, the GEO Group donated $19,000 to state and federal candidates in Mississippi, including $2,500 to Governor Phil Bryant (R) and $4,000 to Walnut Grove’s state representative, Bennett Malone (D) — his second-largest contributor. A 2011 story?by NPR found just how deeply intertwined the correctional facilty and GEO were with leaders in Walnut Grove:

The town of Walnut Grove is so small there’s no stoplight or supermarket. In fact, inmates outnumber citizens 2 to 1. The prison just about saved this town from extinction. The 200 prison jobs helped fill the void when a shirt manufacturer and a glove maker closed and moved overseas several years ago.

The mayor’s own vending company has 18 snack machines inside the prison.

“It’s been a sweet deal for Walnut Grove,” [Mayor Grady] Sims said. Indeed, every month, the prison pays the town $15,000 in lieu of taxes ? which comprises nearly 15 percent of its annual budget.

“For a small town, that’s a lot of money,” the mayor said, “and it helps us maintain a full-time police department that we wouldn’t be able to afford without that income.”

I’d venture to guess that most Mississippians are unaware that this?corruption is being carried out on their dime, and in their name. I?had only a passing familiarity with the Walnut Grove saga?until watching Oliver’s piece.

On one level, it is?distressing that a late night comedy?program?is what’s required to capture?our attention. On?another level, it seems grimly appropriate. After all, if?it didn’t make you?laugh, then you’d have to cry.