This is the third of the?Mississippi Center for Justice?s three-part series examining economic inequality and mobility in Mississippi. Read parts?one?and two.?

As the stability of a republican form of government depends mainly upon the intelligence and virtue of the people, it shall be the duty of the Legislature to encourage, by all suitable means, the promotion of intellectual, scientific, moral, and agricultural improvement, by establishing a uniform system of free public schools, by taxation or otherwise, for all children between the ages of five and twenty-one years, and shall, as soon as practicable, establish schools of higher grade.

In the summer of 1967, Senator Robert F. Kennedy visited the Mississippi Delta. He came to see firsthand whether the Economic Opportunity Act, then in its third year, was changing life for the nation?s poorest residents. What he found was that many Mississippians still lacked the basic means of existence.

The passel of journalists that traveled with him made sure the rest of the country could see what had been previously hidden from view: the crippling, generational, systemic poverty that ensnared many of Mississippi’s families.

Sen. Kennedy’s trip issued a clarion call to Americans to strengthen the layers of protection for our nation?s poorest residents. Soon thereafter, Dr. Martin Luther King, Jr., launched the Poor People?s Campaign to pressure Congress to secure economic justice for America?s marginalized citizens. Dr. King was preparing to lead a march on Washington originating in Marks, Mississippi, when he took his fateful detour to Memphis on April 4, 1968.

The exposure of the economic plight in the Delta by Kennedy, King, and others gave new energy to the War on Poverty.?In a 2012 interview, Marian Wright Edelman, a civil rights attorney and the first African American woman admitted to the Mississippi Bar, reflected that ?the legacy of the Poor People?s Campaign is that there is a safety net program. And it?s called food stamps, and it?s called WIC, and it?s called school lunches and school breakfasts.?

Indeed, in many ways, America’s commitment to ending poverty began in Mississippi. But even though?federal programs?have extended?economic security to?hundreds of thousands of Mississippians, the state’s poverty rate still stands at 24.2 percent, the?highest in the country. Among children, the rate is 35 percent. In 2012, Mississippi was one of only three states to see its poverty rate increase amidst national economic growth.

Mississippians start behind, and a stagnant state economy and declining share of income going to working people?has decreased the odds that Mississippians can transition from their circumstances at birth. The human consequences?are devastating, a point the previous posts on inequality and?immobility cemented.

As Mrs. Edelman concluded to the interviewer: ?We?ve got to do better.?

A vicious cycle denies education to those who need it most

The state of Mississippi has never made the same commitment to its poorest citizens that the federal government did in the 1960s.?The state continues to underfund and undervalue the public needs that offer the best hope for an economy that can create broadly-shared prosperity.

Mississippi?s students remain at or near the bottom of educational performance measures in?reading,?writing,?math, and?science?– stats strongly tied with students’ circumstances outside the classroom. Seven in 10?Mississippi public school children are eligible for free or reduced price lunches, by far the nation’s highest rate.

A bad school system means that the ladder of opportunity is missing its bottom rungs. Schools in disadvantaged communities do not receive the resources to meet the educational needs posed by poverty, while communities with struggling schools are prone to experience outmigration and economic decline. Their tax bases shrink, creating greater concentrations of poverty and fewer resources to overcome it.

Mississippi’s?disparities in property tax values?–?historically the chief source of school funding –?are staggering: for example, a one-mill tax increase in the suburban DeSoto County School District would produce $1.2 million for the schools, while rural Chickasaw County would reap only $10,400?(a ratio of 115:1).?

In 1997, the Legislature passed the Mississippi Adequate Education Program?(MAEP), which designed a formula to close the gaps in local revenue by allocating state funds such that every district could afford to provide its students an “adequate” education. (Communities still fund most capital costs locally, creating vastly different quality of facilities.)

However, in the 17 years since MAEP was passed, its formula has only been fully funded three times (FY2004, FY2008, and FY2009). Even in years with budget surpluses, the shortfalls routinely figure in the?hundreds of millions of dollars.

There are still very serious consequences when the state does not meet its funding obligation. Districts with high enrollment of low-income students suffer the most. They tend to rely more heavily on state and federal money, and repeated cuts leave little room for improvements in equipment, curriculum, or personnel. Increasingly, Mississippi’s schools are paring back?services and losing staff to other states and more lucrative professions.?After all, little financial incentive exists for qualified teachers to stick it out when their salaries are?far below the national and regional standards. 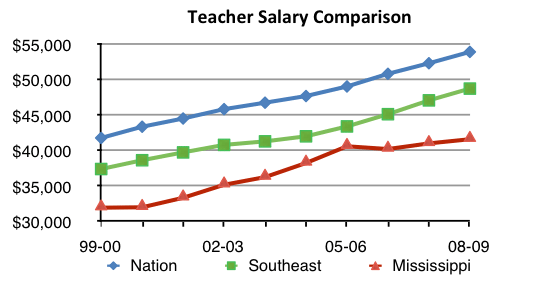 Educational shortfalls disproportionately burden racial and ethnic groups that have historically been excluded from educational and economic opportunity.?Most of the students?enrolled in failing school districts are African American, and?black students are far?more likely than whites?to be taught by less-experienced teachers.

Racial disparities in education translate to?gaps in employment and?income: in?2012, the jobless rate among black Mississippians was 14.3 percent, compared to only 5.4 percent among whites. Among those with jobs, African Americans averaged wages nearly 50 percent less than white workers.

As long as the state has a low-skill economy,?Mississippians of all races can expect to take home less than their national counterparts.

Economists have shown that workforce education is the?most effective?long-term economic development strategy.?Tracking the numbers from 1979 to 2012, researchers from the?Economic Policy Institute?found that the share of a state’s workforce with a college degree was directly tied to growth in workforce productivity. And productivity is the basis for income.

In a global economy that increasingly demands skilled workers with higher education, Mississippi has the country’s second-lowest share of population with a college degree (20.7 percent). Businesses that require skilled employees steer clear of Mississippi for that reason. If they do come, it is often at the behest of a generous incentive package from the state, spending taxpayer money that could have gone to schools.

Mississippi?s diversion of funding from education to corporate tax breaks works against the long-term economic interests of the state.?Economists find no significant correlation between tax rates and median wages, and thus no evidence from any state that suggests supply-side corporate tax cuts lead to a more productive workforce.

In stark contrast, the evidence shows unequivocally that investing in the education of future workers results in long-term economic benefits.?Mississippi must equip struggling districts with the money to prepare students, regardless of background, to earn a two- or four-year degree and beyond.

Only then can Mississippi heed the call of Sen. Kennedy and Dr. King and commit to breaking the crippling cycle of inter-generational poverty.