This is the second of the?Mississippi Center for Justice?s three-part series examining economic inequality and mobility in Mississippi. Read parts one and three.?

The first installment of this series detailed the growth in income disparities during recent decades. Inequality is not incompatible with our traditional vision of America, a place where liberty and enterprise?were vital to our rise as a nation. However, inequality came as only one half of a bargain: you could rise as high as you liked as long as opportunity was shared equally and fairly.

In other words, Americans didn’t mind some people getting a bigger slice of the pie as long?as those born at the bottom had a chance to make it to the top. Conversely, competition from the upwardly mobile would mean that those born at the top would have to work hard to defend their positions.

Data now show what many Americans have learned firsthand: that bargain is broken. Inequality has increased rapidly while mobility has declined.

Opportunity is often dispensed through a game of chance. America?s poor have found themselves in a maze of dead ends and locked doors, especially — as a?recent study?by economists from Harvard and UC-Berkeley shows –?if they happened to be born in the wrong place.

The researchers used?millions of anonymous earnings records for Americans born between 1980-1982 to compare family income at birth to their earnings in 2011-2012. They used the data to construct several measurements of mobility, broken down into 741 geographic regions known as commuting zones.

This map depicts?the chances that a child born into the bottom fifth of the income distribution would rise to the top fifth among his or her peers:

Mississippi’s deep red shade shows that child poverty often turns into a lifelong affliction.?Of the five areas in the country that offer the least mobility among those born in the bottom quintile, three are in the Mississippi Delta:

In terms of?relative upward mobility?— the difference in economic outcomes by children from low-income and high-income backgrounds — four of the five least mobile areas are in Mississippi:

It doesn’t stop there. Mississippi is home to 12 of the 32 least mobile cities in the country. All but one (Gulfport) of the 19 places listed in Mississippi fall within the bottom 100 nationally [See the full list here].

The study’s authors identified several factors that are correlated to an area’s mobility. While these factors do not necessarily cause low mobility, they are strongly intertwined.

First, they observed significantly lower mobility in areas with large African American populations. The effect existed among both whites and blacks in those areas, however, suggesting that the problem lies with the community rather than the individual.

The researchers inferred that residential segregation is strongly tied to immobility. Many of Mississippi’s least mobile towns still have railroad tracks segregating neighborhoods by race and income.

Here, for instance, is a map of Greenville. The blue dots represent white homes, while green dots are black homes:

On the index of residential dissimilarity, Greenville scored a 56 in 2010.?This?means that 56%?of the members of one group would need to move to a different area?in order for the two groups to be equally distributed — a high level of racial segregation.

Family structure is also strongly tied to upward mobility: areas with high concentrations of single-parent homes have lower mobility across-the-board, even among residents who grow up in two-parent homes. Mississippi’s least mobile areas have the highest rates of single motherhood in the country. Rather than supporting them, Mississippi constricts opportunity for single working moms and their children. They are disproportionately confined to low-wage jobs that do not lift their families above the poverty line, and strict eligibility for child care subsidies leaves many of them who want to work full-time jobs without the ability to do so.

The researchers found that a high degree of inequality will stifle mobility as well. As the previous article in this series showed, Mississippi’s top 1 percent have captured nearly 30 percent of the economic growth over the past three decades. Without a strong middle class whose productivity is rewarded with rising wages, the rungs of Mississippi’s economic ladder will become increasingly slippery. As the following chart shows, compensation for workers around the country has leveled off since the 1970s despite rapid increases in how much they can produce: 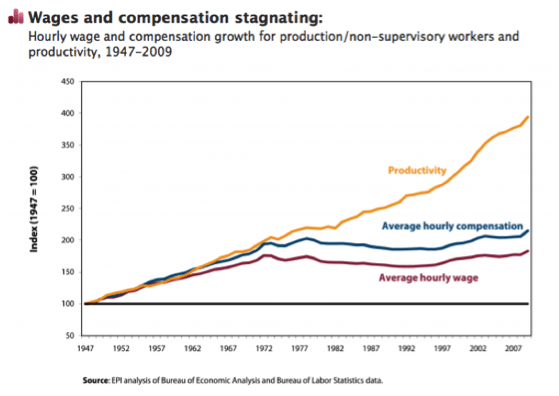 The study also linked the?quality of local schools?to upward mobility. Mississippi’s public school students of all races underperform?their national and international counterparts, but the lowest achievement rates often overlap with the least upwardly mobile areas.?The most basic investment that can be made to ensure state prosperity is more evenly shared is simply equipping young people with the best possible education. Unfortunately, Mississippi?s Legislature can?t seem to fully commit to this basic component of human progress, underfunding the adequate education formula by $255 million this coming year and $1.3 billion over the past five years.

The one saving grace for Mississippi is a variable called social capital, a measurement of personal networks and community involvement. In Mississippi, social capital is often developed through churches and other religious organizations. These institutions can create interpersonal relationships and community cohesion, which the researchers found to be correlated significantly with upward mobility. Those of us from Mississippi know how compassionate our people can be. The question is how we can simultaneously tolerate such an unjust plight for our fellow Mississippians born without privilege or opportunity?

This won?t be answered here, but it does leave one to wonder. As different voices have alluded to throughout history, and indeed what insightful economists suggest, there are common sense policy choices that Mississippi?s lawmakers can act on today to secure better odds for the children of our future.

In the next post, we will see that solutions to these problems are within our reach. We will discuss how investment in public education is key to our prosperity and to making sure our poorest have the opportunity and the tools to live in the America that the rest of us enjoy.